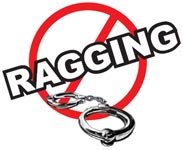 Ragging in any form is not permitted in the College campus including Hostels and college buses. If any student violates the orders in force,he/she will be dealt with as per the Kerala Prohibition of Ragging Act, 1998. If the applicant for admission is found to have indulged in ragging in the past or if it is noticed later that he/she had indulged in ragging admission may be refused or he/she shall be expelled from the institution and fees paid will not be refunded to the student. It is mandatory for every student and parent/guardian to sign a combined undertaking in the prescribed format as per Anti Ragging Law. An anti-ragging cell is functioning in the College under the control of the Principal and is guided by the District Collector and Deputy Superintendent of Police, Neyattinkara.

As per mandatory disclosure system, information regarding measures for preventing of RAGGING, as per AICTE notification 2009 and Supreme Court direction and recommendations of Raghavan Committee, is published for the information of all concerned.

Want to study at PRSCET?